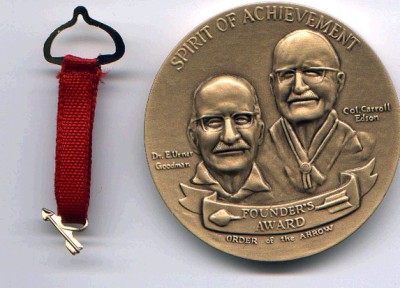 Introduced at the 1981 National Order of the Arrow Conference, the Founder’s Award recognizes Arrowmen who have given outstanding service to their lodge. The award is reserved for an Arrowman who demonstrates that he or she personifies the spirit of selfless service, as advocated by founder E. Urner Goodman and cofounder Carroll A. Edson.

The award is a handsome bronze medallion bearing the likenesses of E. Urner Goodman and Carroll A. Edson, with a wooden base and a brass plate suitable for engraving.  Available for uniform wear is a gold-colored arrow suspended from a red ribbon.

Lodges may petition the national Order of the Arrow committee to present between two and four awards annually, depending on the number of members in the lodge. If the lodge presents more than one award, at least one must be awarded to a youth under the age of 21. 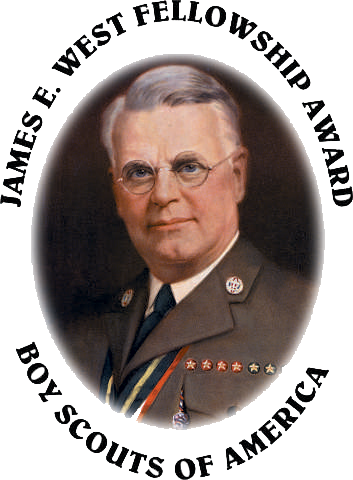 James E. West was the first Chief Scout Executive of the Boy Scouts of America, and he served in that position for more than three decades. The West Fellowship award is available for gifts of $1,000 and up in cash or marketable securities to a council endowment fund. The gift must be in addition to— and not replace or diminish—the donor’s annual Friends of Scouting support. Many individuals and corporations make these gifts either on behalf of someone else—such as in honor of an Eagle Scout, Silver Beaver recipient, a retirement, a special accomplishment, or anniversary—or in memory of a special individual. If an institution is truly “the lengthened shadow of one man,” it is more than fitting that the BSA honor James E. West’s major contributions to Scouting in such a significant way. The lodge has made many contributions to the council endowment fund honoring arrowman who have given unselfish service to the lodge.